Thus the pattern of our hands shuffle

Thus the pattern of our hands shuffle 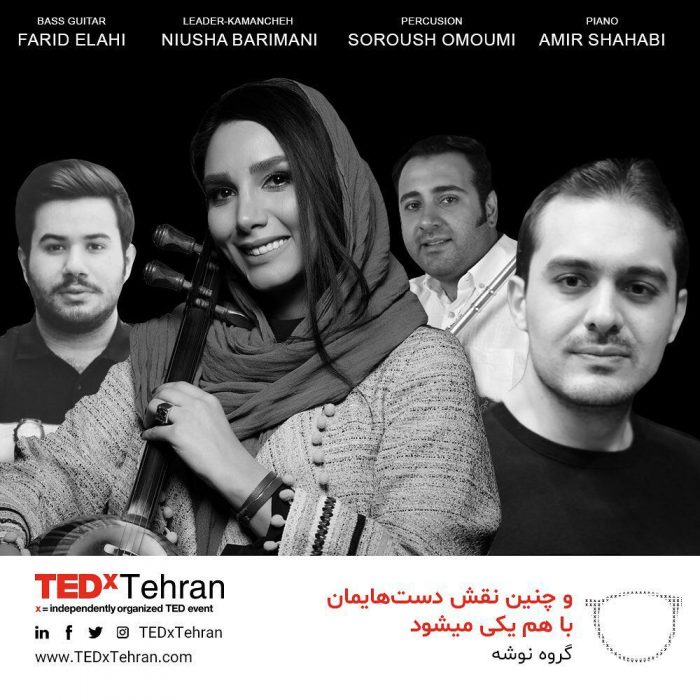 Nushe,the only jazz and pop band formed and led by a woman in Iran, is formed in year 2013 in Tehran by Niusha Barimani.
She was born on April 1984 and she is a kamancheh player, leader and producer .
She started learning academic music when she was 10 and graduated music university afterwards.
She teaches at the music school of national Tv & radio of Iran since 2008 until now.
She is the owner of Niush (Persian fusion music album ) which was Nominated in three categories in (Musice_ma music awards )for the Best Album /Best Composer and the Best Arranger of the Year in 2015
She performed in the album of Arifa &voices from the east (international ensemble ) live concert at the Bimhuis -Netherlands and the CD released by (Buda musique) in 2014 and also the album is recognized as the Best cd that is Published in 2015 in Netherlands .
She Performed in different countries such as : Canada,Austria, U.K, Germany,France,Netherlands,
Belgium,Denmark,Sweden,Qatar,Armenia,Azerbaijan,Japan ,Mexic ,Morocco,Poland ,and...
Very well known and famouse musicions such as Mr.Amir Shahabi as the pianist, Mr.Soroush Omoomi as the Percusionist and Mr.Farid Elahi as the Basist of the group accompany Nushe band on todays concert.